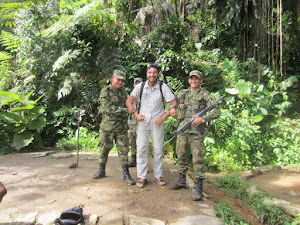 Now that I’m back to the amusement park called Netherlands, when I tell people I’ve spent almost 3 months in Colombia the first questions I get are about safety. Did you feel unsafe? How dangerous really is? Did you have scary moments?  First of all, I consider myself fortunate as I didn’t had any real bad experience, excluding a mobile phone that had disappear most likely because I lost it rather than got it stolen. The reason is partially because I look Colombian and I could not be easily identified as a tourist, till I open my mouth and speak a word. Around me I heard different travelers that got robbed in the most amusing ways, like the dude got surrounded by 20 transvestites padding his butt and bye-bye wallet, but really nothing more serious than petty crime. The point is that, how do we say if a place is dangerous? If they tell you that a bridge is about to fall down, you’ll feel in danger crossing it… but are you, really? If nobody tells you, you may walk on a cracked bridge without noticing it and feeling totally safe even if you’re actually in great danger. And if you walk on a bridge and you notice a crack… you’ll feel suddenly in danger! Colombia is considered dangerous because of violence by narco-terrorists, but what did I experience as a backpacker? There’s no a single and simple answer about all the different places and areas I’ve been, so I rather use few stories from the road… 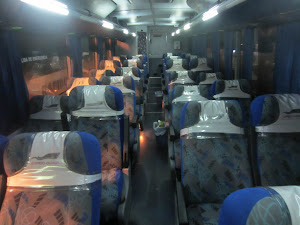 bus from Sinselejo to Medellin

FARC, the terrible Colombian guerrilla, still exist but is generally off the main routes used by the travelers, hidden somewhere in the vast jungle areas. I said generally, because this story is proving the opposite. When I was in Mompox, along the Magdalena river, I met 2 friendly Israelis continuing their trip to Medellin. I didn’t manage to convince them to stay one more day in this quiet Colonial town, so they left the day before I did. But I arrived in Medellin only 4 hours after them… because they got stuck for >12 hours in their bus as the road was completely shutdown. On the main road the FARC stopped 2 buses, evacuate the people and burned the vehicles down. Nobody of the passengers was hurt but indeed is not a joke. To see how active the FARC is, you can check this Wikipedia article titled List of attacks attributed to FARC. – I’m glad I didn’t see this before going there 🙂 In other areas, like the one around Popayan, in the department of Cauca, taking a night bus is too dangerous to be recommended. To summarize: better to check with the locals if the bus route is safe and step out of buses if any soldier is asking.

Story #2: that dark road at night 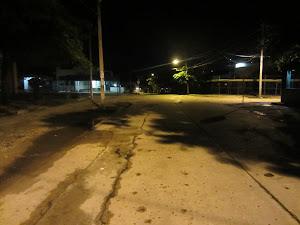 are you afraid of empty streets?

It’s well known to don’t walk around alone at night in dark, empty roads. But never the less I found myself in the road here in the picture, at 4am, in Barranquilla, alone and tipsy. It was a stupid idea of course, but I remember at that moment I thought: “if I see someone, I’m gonna get scared to death. But if someone sees me now, it must get scared too!”. Then I decided that I would have robbed anyone approaching me. Robbers don’t rob each others, right??

Story #3: the trick of the empty bottle

I wrote already that the area of Bogota’ where the hostel was, the Candelaria, didn’t make me feel safe at night. The beggars, very insisting in asking money, gave me a feeling I didn’t encounter in any other place around. So here is the story. I was visiting a Spanish travel-friend in another hostel and I ended up staying there listening guitar till 2am. When I announced that time arrived for me to leave the gang, the (Colombian) girl working in the hostel said the following: “oh no! you have to cross the square at this time? Take an empty beer bottle with you, just in case!” I politely refused: “giving away my fake wallet and my camera” VS “defend them fighting with a broken glass”… I was sober enough to opt for the former. But I got really scared by the commend and I was freaking out walking alone in the empty little streets. At day, this is a lovely bohemian barrio. At night, it’s a desert with only few security guards at some crossings. I jumped on the first taxi I saw (and I was lucky to see one) and observed from the window the poor beggars in the square…

Story #4: who robbed me in Colombia?

Yes, actually I did got robbed while I was in Colombia. Not by the beggars, not in the shops, not by the terrorists, not by the police. Actually, not by a Colombian. I got robbed by my Dutch bank, that charged me 2.5 EUR for each ATM cash withdrawal!!*   *from the bank site: Withdrawing currencies other than the euro: € 2.25 + 1.2% exchange rate surcharge

Papaya is a fruit, yes. “Dar papaya” (give papaya) is a Colombian expression  that means exactly “don’t give the bad guys any opportunity”. In Colombia you better don’t give papaya, but it’s appropriate to find a balance between don’t take risks and threat anyone like a thief, or your time there will become a nightmare. People are fundamentally good, I believe, and following this believe I could enjoy the humanity I met.

Where to dance Salsa in Cartagena, Colombia

Where to dance Salsa in Barranquilla, Colombia

Bring a jacket to Bogota’