May, 2007 – Door to door: Amsterdam-Albiate, and back. Another crazy idea realized, only one week after running a marathon – but that’s another story.

6:00am: woke up, after a very anxious night because of the excitement of the long trip ahead

7:33am: after 1Km already the first problem: I almost loose the bag on the passenger seat entering the Amsterdam ring

7:48am – I’m terrified by the idea that I may loose the bad along the way, I already stopped 4 times checking the bag

7:56am – Finally reached a big gas station where I can buy a special rope that I use to properly fix the bag. Problem solved, I feel better and I start again driving towards Germany.

8:45am – Before the border I stop in a gas station and I find the parking full of motorbikes.
Inside the bar there’s a group of people from a big motoclub that are celebrating the 45 years anniversary with a weekend in Germany.
They are concerned when I tell them that I’ve to reach Italy.

9:33am – I cross the border with a smile on my face and I carry on the autobahn checking the speed signs: sometimes 100, sometimes 130 and sometimes unlimited.

10:23am – For my silly habit of waiting the last moment to fill up the tank I almost run out of gas and I have to quit the highway looking for a gas station.

10:41am – Gas station found, but I mess up with the directions and I enter the highway in the direction of Amsterdam. Had to quit again, turn back, drive back, and I waste time.

11:12am – I find roadworks and, thinking about all the time I lost so far, I drive a bit too fast slaloming between cars and trucks, when suddenly a POLIZEI car appears on my side with the siren on.
They tell me that is illegal to overtake cars when there are roadworks, but that normally is tolerated… but I was going too fast: after the moral, they give me 70 EUR fine paid by credit card, Aufidersen Goodbye… but wait a moment, I can’t leave without a picture!

This photo was taken by the policeman, while cars and trucks drivers were slowly passing by laughing and honking.

11:53am – Again in a gas station (my motorbike is more thirsty than the Ugly after the Good had left him in the desert, I’m talking of course about the movie “The Good, the Bad and the Ugly”).

I enter the shop to pay the fuel and when I’m out I find 2 big men in a green uniform standing close to my motorbike waiting for me… and this time what’s happening??

They are from the custom and they stop everyone that is coming from Holland to check if they have too many tulips.

Because Amsterdam-Milano is as classic in the drug smuggling as Barca-Real is a classic in football, they open all the bags and check also the pockets of my jacket.

12:45pm – Driving across Germany, a very long way to go but weather is good and roads are great.

5:03pm – At the Swiss border there are 2 lines: “with stickers” and “without sticker”. Of course the sticker is required to drive on the Swiss highways, an invention to squeeze money out of people crossing the country once a year while keeping it very cheap for who takes the highway everyday.

I pay the 27 EUR and I get it, sure that the roads, in the country of the more sophisticated watches of the World, will be perfect.

5:06pm – Instead, after 1Km I’m in one of the worst queue I’ve seen in my life!
Even overtaking the cars was very difficult, as the road was very narrow  because of the roadworks on the sides.
Last thing I wanted to do after 700Km… are 10Km of queue under the sun with the wrists that started hurting…

9:49pm – Off to Bern Salsa Festival. Why do you think I choose to stop in Bern?
Nothing better than going out dancing after a whole day bent over the motorbike.

10:34am -I leave Bern under a very strong rain
Do you know the beautiful Switzerland roads in the valleys, the green hills contrasting a blue sky, cows calmly chowing grass…. I’ve drove on that road, but in an horribly dark sky pouring water all over me!

12:02pm – After the Gottardo pass the rain stops and, I can’t believe it, I reach Lugano and I start having that sensation of coming home: finally roads and places I knew!

12:45pm – I feel the chicks-pad inside the helmet pressing on my face, and I realize it’s because I’ve now a big smile on my face: I’m almost home!

1:12pm – After 1200Km I take the wrong direction in Como, a city where I’ve been with the motorbike a thousand times never learning my way around

2:22pm – I stop in a town called Meda for a quick greetings to my friend Alessando: he’s impressed

3:46pm – I reach my village, Albiate, where I stop in the main square where my friends were waiting… what a historical moment… it’s since the end of 2nd World War than nobody came back from that far!

7am – leaving Albiate with terrible weather forecast over all Europe

My plan was to do as much Km as possible during the first day, maybe even driving all the way up to Amsterdam as there were no Salsa congresses to stop by.

Usually the trips back, everyone knows, are shorter some some strange mind game…. but this wasn’t the case!

8:38am – I leave Italy behind me at Chiasso, and I cross quickly the Gottardo tunnel and Switzerland where the weather is good.

11:22am – In Germany, I start feeling something quite not right with the front wheel… TAC… TAC… TAC… I stop to check but everything seems OK, so I think that maybe it was something with the asphalt creating that effect.

11:28am – After few Km, my confidence on the motorbike is back and I speed up, but suddenly again TAC… TAC…. and I feel a vibration on the handlebar that increases my white hair: the front wheel bearings are broken!

I slow down, trying to stay calm. If the bearings break completely the little balls they contain may come out and completely block the front wheel… sending me in another dimension.

I drive on the emergency line so slow that takes a long time to reach the gas station 1500M ahead. Then I stop thinking what I should do.

11:52am – In the restaurant eating some sausages and sauerkraut, so that I can calm down, then reasoning what to do: I’m somewhere in Germany with a motorbike too risky to drive, and 900Km still to do…

Luckily I joined the Dutch ANWB, that is the road assistance service in the Netherlands, with option for European coverage, so I check where I am on the restaurant bill and I call them requesting help.

1:24pm – An old man arrives with a car supposedly to support me. Indeed a car can’t transport a bike, and he can only confirm that nothing can be done after checking that the front wheel is still attached to the bike

1:48pm – A German troll arrives with a yellow track, so big he could fit 3 van in the back but not a motorbike, because he doesn’t have the tray where to place it

2:17pm – A German ogre arrives with the right truck.

The typical German man, that makes me think about beer and sauerkraut, loads the motorbike on the truck and drive us to a Suzuki dealer.

2:53pm – The dealer tell me that they don’t have the bearings in stock but they could order them, so they could arrive in a couple of days

3:21pm – Thanks to the dealer, after many phone calls they found the part in another local shop.

At that point, as visible on the picture, the mechanic could fix my motorbike literally with the hammer 🙂

5:00pm – With this inconvenient left behind I’m on the road again, a bit discomforted for my vehicle reliability, but it’s the weather now that is against me, throwing on my road an incredible amount of rain, amplified by tracks and cars that on a bad asphalt are raising all the water from the ground… zero visibility, I keep on driving with big effort and I frequently stop also for the cold.

7:03pm – I gave up and “the wisdom overtakes the craziness”, as Dr. Costa would say in a MotoGP race, so I stop in Karlsruhe in the first hotel I see.

I’m half way from Milano to Amsterdam, it’s cold and the forecast for next day is BAD.

9:22pm – The evening is a disaster, I’m really sad and I’m worried: technical problems, rain, what else could happen??

7:00am – I hit the road, the morale is high because it is not raining but there are few clouds

The day is much better and as the road goes I feel better and the hope to reach home is back. In some parts I do find rain, but is not as strong as the day before and I can handle it.

10:25am – After the rain also the wind wants his share of the story, putting me in difficulties in a bridge over a valley where even if the road is perfectly straight I’m driving dangerously bending on a side…

11:28am – Km and gas stations are passing by, and finally around noon I reach the border with Netherlands, the country of… sun!

In the picture here my hair are so messed up that the tree behind my head seems belonging to my head.

12:55pm – Only 30Km away from Amsterdam and I feel safe and sound, but suddenly I’m overtaking a MILITARY TANK and I think I totally lost my mind

1:06pm – I stop at the first gas station waiting and, I’m not crazy, here it is the military tank happily driving on the highway!

01:35pm – Back home! Tired by the many hours of driving as well as by all the intense moments along the way.

In the picture, me striving to find a relaxing posture.

After this experience, I said to myself: never ever.
Especially alone, and with a motorbike that is 10 years old.

But of course, 2 years later, I was on the road to Italy again… But that’s another story.

Here all the pictures: 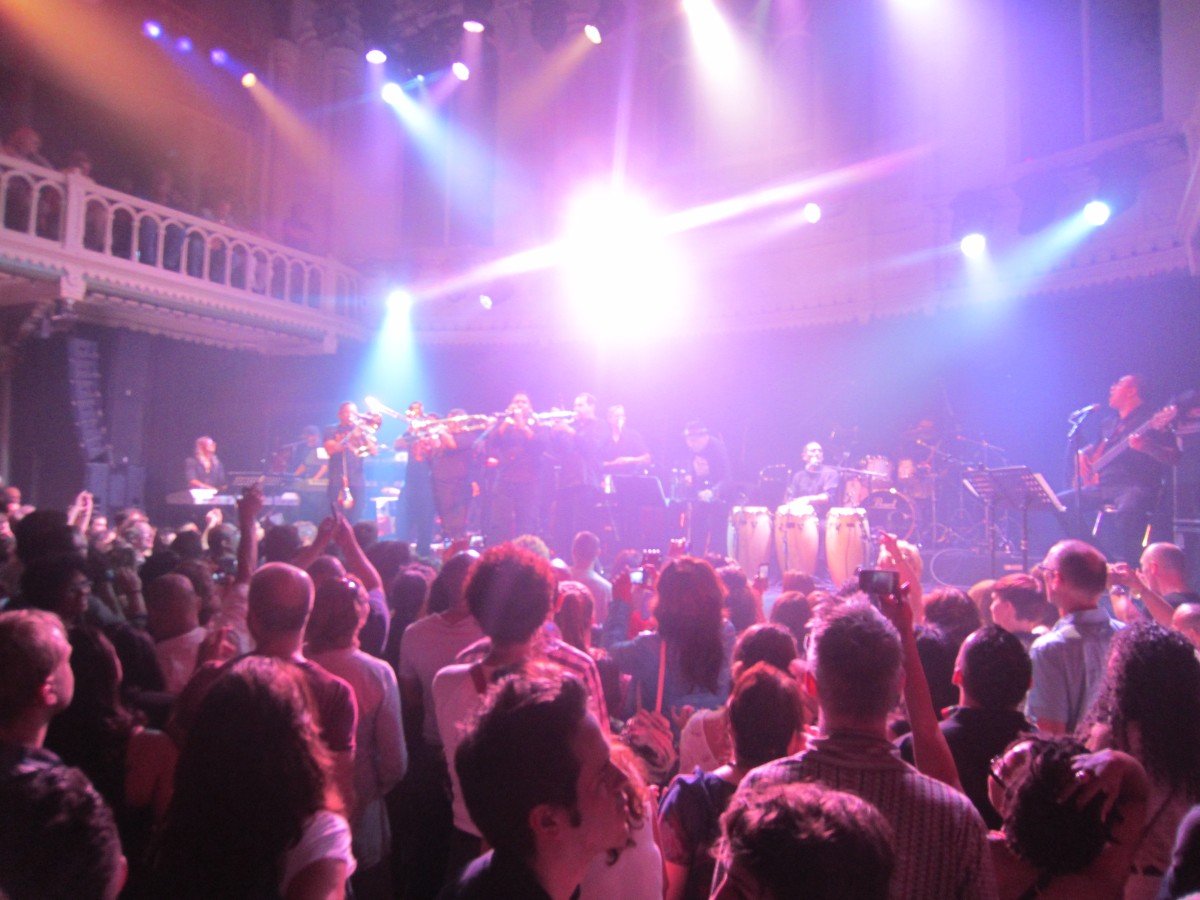 Where to dance Salsa in Amsterdam