At the beginning of 2016 I spent a couple of weeks thinking hard about setting goals. Bear in mind: goals, not new year’s resolutions!

I remember being in Ireland, drinking Guinness and reading all sort of articles: from focus on the feelings to why new years resolutions don’t work.

I used my leftover analytical mind and chose the SMART approach.

You may find this approach too limiting. Some people are motivated by impossible goals. I am not. I prefer something that I can achieve with hard work and discipline.

We set goals for our self. To beat the person we were once. To don’t get bored. To move forward. Not to impress friends telling how great we’re gonna be.

“TELL THE WORLD WHAT YOU INTEND TO DO, BUT FIRST SHOW IT.” – Napoleon on a Hill

More than new-year-resolutions, they were end-of-January resolutions, heavy fueled by Guinness indeed.

While I know people that read more than 60 books in 12 months, I usually take 60 months to read 12 books.
But I knew that I can read one book a month, especially if I avoid Gregory David Roberts and focus on short stories.

It has been a pretty mixed selection of books 🙂

Very proud of the ‘least popular’ book: From Austerity to Prosperity. I bought it in a café in Georgetown, Penang, Malaysia. The place was run by volunteers from the Buddhist Compassion Relief Tzu Chi Foundation and they were so nice and peaceful that I wanted to know more about their philosophy. Apparently, I was the only curious one. I added the book to GoodReads myself and so far I’m still the only reader – try to beat that!

Yep, I did it. This one took a lot of perseverance and motivation.

In May I run every single day for 30 days and that experience taught me a lot, but also helped move towards my 2016 goal (234km in one month!). After May, I thought that I could end up 2016 with much more than one-thousand kilometers.

The last months I could not be constant as I wanted to, even if I managed to run my best 10K ever. And in December I had a nasty cough for two weeks and fever for one, so I could reach the 1,000 mark only a few days before Xmas.

Yep, I did it. But it was so close to never happen!

With its mid-90’s interface, Garmin Connect doesn’t really give much joy when a goal is reached.
Even less when it shows the report of the activity per month: 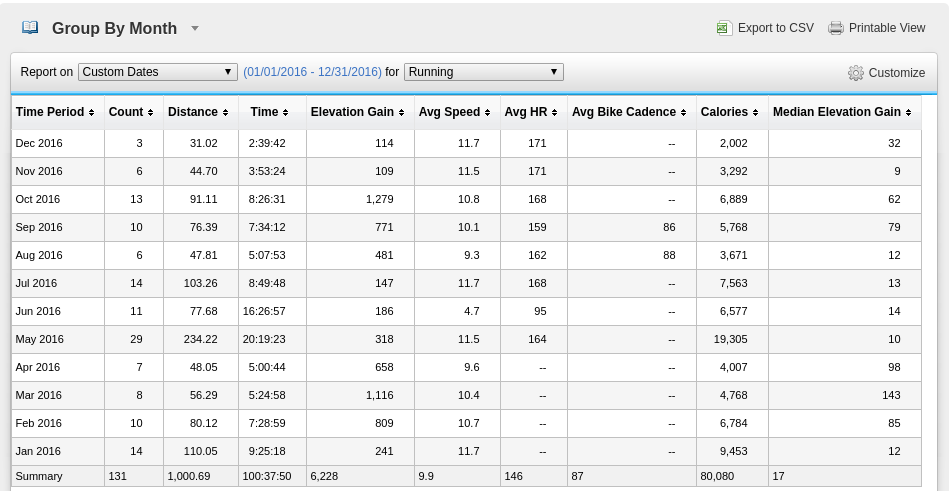 Anyway, the hardest part was keeping up running while traveling, especially in tropical countries where humidity and heat were killing me (I never got used to that, really!).

In 2016 I run in very interesting and beautiful placed, here a few:

I wanted a financial-related goal. The problem is that ’10x the revenue’ or ‘double the profit’ or ‘get 20 more customers’ were not very appealing to me.

I want to avoid the ‘work for work’ situation and find myself running after some vanity numbers, just because a company is expected to grow year over year.

I run a lifestyle business and I’ve no investors to please. My priority is not to grow for the sake of growing, but rather enjoying my life and what I do – business included.

That’s why I decided to put a goal related with the bottom-line of the whole concept of work: the amount of money I could save in 2016.

Only the amount of money I can save is giving me an accurate indication of how good I’m doing, and here is why.

You can double your revenues but spend everything: this doesn’t make you any wealthier.
You can triple your salary but double your spending: you’re actually getting poorer.
You can have the same earnings but reduce the cost of your lifestyle: you’re creating wealth.

I’m not advocating cheap living, but I already wrote about frugality and how I think can increase one’s quality of life.

I’ve been frugal for a few years now, avoiding expenses that don’t make me happier and, as a result, I don’t need a lot of money to sustain myself (1,000€/month is more than enough).

But I do believe is important to save money for a better future, as money has the power to give financial independence and that’s one of the highest form of freedom: freedom from money itself!

So, I concluded that saving an extra 10,000€ in one year was my perfect financial goal.

It went much better than that, actually. I’m not bragging about money, but knowing that I increased my asset and wealth give me a fantastic feeling.

Looking back to 2012, when I quitted my highly paid corporate job to start my entrepreneurial journey, the financial uncertainty had a high toll on me.
Seeing the pile of savings going down with an unclear outlook gave me lots of worries. Most of them were unjustified, I have to say, but still… looking back I realize how affected I was by that, and how content (I think that’s the right word) I feel now.

I wanted to work less and live more.

I failed at this one.

Actually, I failed measuring this one. I just don’t know how many hours I worked in 2016, let alone per-day.

While traveling I certainly reduced the amount of time spent working, but while in Amsterdam I got easily sucked in very long days behind the notebook in my living room.

I had days where I worked from early morning till late evenings. But also other days where I visited a temple somewhere exotic, and just checked e-mails in the evening.

So it’s hard to say if I worked 6 hours/day, and probably even pointless.

Pointless because at the moment I’m happy to work on my business and fulfilled by what I do every day.

I stress on at the moment, because it wasn’t always like this in 2016. I had quite dramatic ups and downs.
In August the sky fell over my head when I lost few customers, my team wasn’t working and I got bad news from back home.

2016 wasn’t a bad year, and here three lessons I learned.

1. Freedom to travel and freedom to be home are two sides of the same coin

In August I got bad news from back home. I left Bali and went back straight to Albiate, where I stayed for few weeks.
And I realized that the freedom to stay with my family when needed is the same freedom that keeps me on the road.

The freedom is not to travel: is to be location independent and be anywhere you want to be.

I never wanted to manage people. But now, I naturally realized that managing people is a great skill to have and the sooner you start working on it, the better is.

Everyone agrees that being an entrepreneur means work on the business and not in the business.
In other words: let others do the job, and focus on the high-level nitty-gritty.

I feel like I have a lot of high-level nitty-gritty fun stuff to work on, and I mean developing the business, create the procedures, improve the marketing, and indeed managing the team.

I’ve been doing all on my own for a very long time and now I see that the only way to continue without going crazy and actually having fun experiencing new areas is to build a team.

It took me few months in 2016 and few failures. But now I’m more confident than ever and I can rely on a small team of two part-time WordPress experts, one VA, one business partner (for the RouterFreak project) and some external collaborators.

Dealing with other people is a struggle sometimes but also more natural than working alone all the time.

Most of the times, it’s better to do something wrong than don’t do anything.

Being afraid of failure or rejections is normal, but reading self-help and business books, listening podcasts, and follow all the influencers will never replace some real-life personal experience.

Nowadays is too easy to absorb information and learn stuff leaving behind the practical part. I’ve been in three masterminds during 2016 and while sharing opinions and compare approaches is great, you must eventually pull the trigger and just do it.

Send that email that scares you (and get unsubscribes), share that article on a Facebook group (and get insulted by someone), record that YouTube video (even if your voice on camera sucks).

Most of the things won’t go well, a few will.

That’s it, now is time to focus on 2017 and write down some specific, measurable, achievable, realistic and time-bound goal! 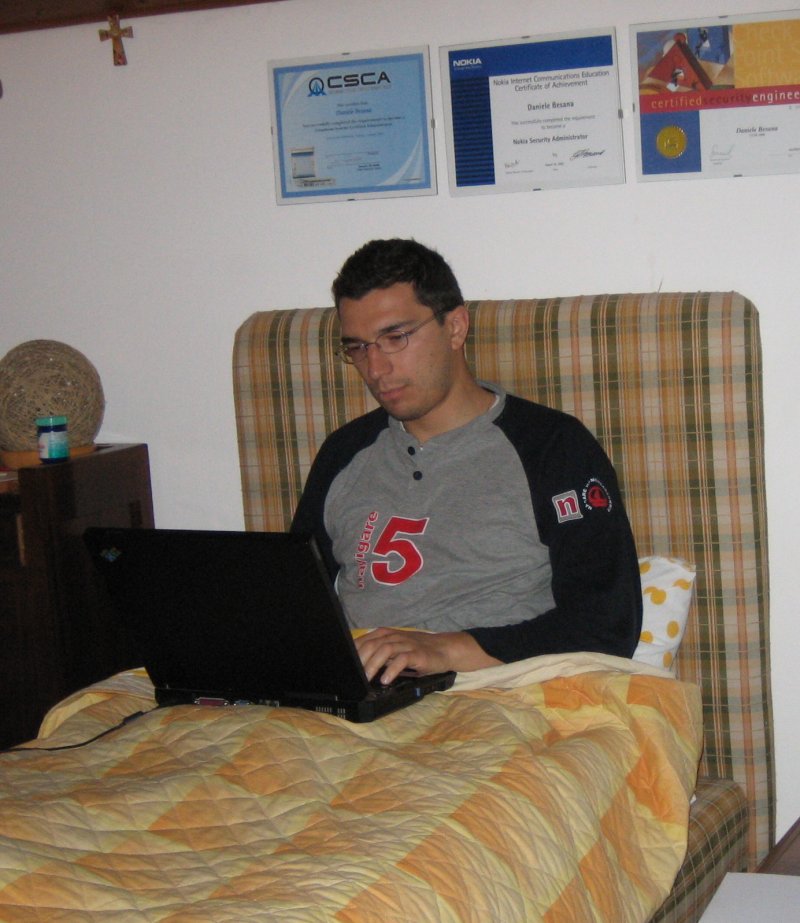