Sailing from Panama to Cartagena 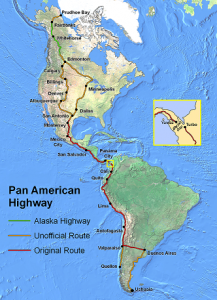 The Pan-American highway runs for 47,958 km (29,800 mi) from Prudhoe Bay, Alaska to Ushuaia, Argentina.
But… is not complete. A 87 km gap exists between Panama and Colombia.
87 km of rainforest, swamps, guerrillas, called the Darien Gap that was crossed for the first time only in the 1960!

So, there´s no road between Panama and Colombia.  To cross the Darien Gap, you can take a (relatively) expensive and boring plane, or be adventurous and go via boat.

I choose the boat indeed. There are sailing boats that runs without a fixed schedule and take people on a 4-5 days trip passing through the paradisiac San Blas islands for something like 450$…

The last days in Panama I felt a bit down for the first time in my trip.

I had to wait 3 more days for the boat trip to Cartagena, I didn´t meet interesting people in the hostel and things were not going as I expected*.

I asked if there was any boat leaving earlier than the 9th June and YES, the catamaran “Fritz the Cat” was just about to leave the morning after and seemed promising as 5 people from different nationalities already booked in.

It was very important for me to have a look at the participants names before joining a 5 days boat trip… last thing I wanted to do is to share a tiny boat for 5 days with a group of American teenagers or a group if post-army-service Israelians.
In the first case I could understand what they say, in the second case not, anyway I don´t know what´s worst 😀 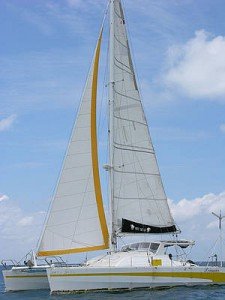 Back to the story, the captain (Mr Fritz) was in Panama that very moment and could pick me up the same afternoon, saving me from a 5am wake up the day after. Perfect!!

I felt happy and excited.

I got picked up by a jeep with Mr Fritz and few more guys, then they drove us across the country towards the Atlantic sea, to the hills of the Kuna Yala province and after them, down to the seaside where a little boat was waiting for us, to reach the catamaran “Fritz the Cat” at the end of the day.
It´s an amazing sailing boat and I like it!!

On board there was a good mixed crowd, ranging from a couple of honeymooners from New York to a Corean guy traveling alone, passing from some hippies and another fellow Italian. 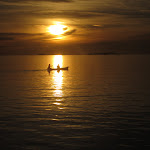 We went onboard, and got the “life on board” rules and then started getting to know each other. Cool people. No girls around (except the honeymooner) but it´s probably better like this. People are more relaxed 🙂

Watched the sunset colors, pancakes for diner, then enjoyed few beers outside talking with the crazy dirty Mr Fritz.

Early wake up on the boat to watch the sunrise… but no alarm required, everyone woke up naturally.

Good breakfast onboard and then Mr Fritz left for Cuba with our money.
Captain Roland, a 2mt giant that found his space on a little boat, put anchor up and gently moved the boat reaching a little island called El Porvenir… truly a gem!

I was shocked by the beauty of… everything around. This San Blas archipelago is even better than I could imagine, I let the pictures talk! 🙂 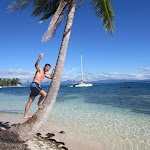 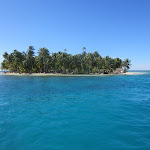 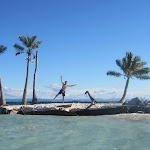 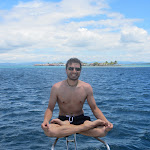 “It´s like living in the Windows desktop background!” someone said 🙂

From this moment on, the days became hopping from one micro island to another, jump in the water, swim and snorkeling around the coral reefs looking for manta, barracuda, star fish and a miriad of colorful fishes.

Those islands are inhabitated by the local tribe of Kunas. 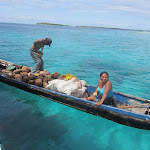 DAY 2 – another day in Paradise 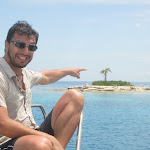 This time we arrived to an island completely desert, so small that only one palm tree was on it.

We open a coconut that was lying on the ground: it took some time to remove the outer layers and reach the core without any tool, but we eventually could drink the milk and eat the flesh.

Jesus, the hippie, got naked there, to connect with the Universe, I guess.
Some weed appeared on the desert island, that we called then “Isla Maria” 😀

In the afternoon we sailed and anchored the catamaran between 2 islands both reacheable snorkeling… and I was thinking: we´re sailing in the Caribbean Sea, this is an amazing experience!

It´s a common idea that this is something for millionaires, that you must be rich to visit a desert paradisiac island. So we give a money value to this experiences that is not the real value of them. And we create a market for people to sell us the experience we valued. But if you go out of the schema, you can find that sailing the Caribbean is possible with just 450$ and the right spirit (that you can get for free).

DAY 3 – from Paradise to Hell 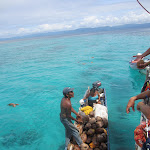 Of course, I got sun burned on my back. If not in the Caribbean, where else?? 🙂

We spent the morning anchored where we were and buying some coconuts from the Kuna. 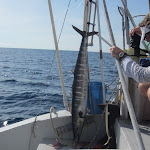 Soon after, a giant fish got catch in our bait and captain Roly made it ready for the diner…

After lunch we kissed goodbye to San Blas archipelago and started the trip to Cartagena. About 40 hours of navigation in open sea.

I suddenly remembered what used to happen as a kid when I was going somewhere by car with my family.
On every trip longer than, say, 30 minutes, I would feel sick.
It was hell, and anti-motion-sickness pills were going out where they came in.

Can you see why this came to my mind while navigating in open sea?

The poor catamaran was moving and rolling and being hit constantly by the waves all evening and all night long.

At 5am I had my shift at the steering bar. Yes, because the captain was sleeping so we had to cover 1 hour shifts checking that we didn´t crash into something. Or into something visible, at least!

My shift was a pleasure: light was coming up and looking at the horizon helped my sensorial system.

For the rest of the time, only horizontal sleep could help so I spent more than 20 hours sleeping in the next day!

Basically all the remaining time to Cartagena, excluding lunch (little), diner (very little of the fish we cought!) and a transcendental chat with Jesus about life energy, earth chakrás, 2012 and the like.
While I found the conversation very interesting, it was very conceptual and I´m not sure how much weed effects driven. 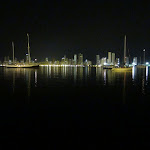 Back sleeping. I woke up at 4am realizing we were anchored in Cartagena. The trip was over, I am in Colombia!!

But what I saw outside wasn´t the lovely colonial Cartagena everyone was expecting.
It was more like arriving to Miami: modern skyline, tall skyscrapers.
The captain explained later that this is the new part of the city built to wash the money coming from drug dealing, and buildings are mostly empty and unused. 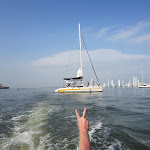 I waited for everyone else to came alive: it´s funny how a group of people can wake up together at the same time with no apparent reason. It happened all the time in those 5 days!

After breakfast we left the boat and spread in the town.

I uploaded all the photos here: 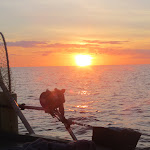