“Oh yeah, you’ll be like a star there…” said my friend Tatiana with a grin before I left Amsterdam.
And, indeed, that’s what happened when I visited her project in Barranquilla 🙂

After I injured my knee on the Ciudad Perdida trek, I was forced to rest on an hammac reading, writing and drinking for 3 days in the Taganga village on the Caribbean coast (not a bad place to recover!)

As soon as I got some mobility back I continued my walkabout for one of the experiences I was looking forward the most: visiting the Ninos en Contacto project in Barranquilla.

Ninos en Contacto is (update: it WAS, because the project completed in 2012) a Dutch organization run by my friend Tatiana, with the goal of sponsoring a local organization in providing education to kids in one of the most troubled areas of Barranquilla.

While the long term project is to create a computer class there, they had recently started English classes for about 60 boys and girls, so when I first spoke with Tati about my trip, we both got excited by the oportunity to visit the project, an invaluable experience for me and valueable information for Ninos en Contacto.

So I reached Calle 28, barrio Revolo, Barranquilla, where my local contact Leticia was waiting for me.

In the next days I got to know this Calle 28.

Everyone knows each other, everyone spend the evenings sit outside in the street, everyone passing by greets with a polite “adios!”. 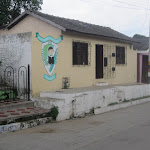 I felt a nice family feeling at first, that remembers me the summer evenings in my hometown with my family riunited in the courtyard having an ice cream, gossiping and enjoying a little fresh breeze.

But this is not my hometown. This is barrio Revolo in Barranquilla. A kind of latin novela: pure drama.

One night a fight between husband and wife ended up in the street with scream, punches and blows.
The day after an 8 years old drug addicted girl was picking up garbage in the street.
The last day a group of women was rushing in the street looking for another girl involved in some love affair gossip. They called the police, because “la van a matar” (they will kill her).

Even I could simply not go around alone. One evening I was having a little walk when Leticia´s mother run after me warning me to go back to the school, that Leticia should have been with me!

This is calle 28 in Revolo.
This is where are growing the kids that Ninos en Contacto is helping: in this constant situations, threats, social problems, PLUS the problems that they have in their homes… 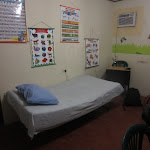 my bed in the classroom

Leticia kindly arranged me an accomodation in the classroom inside the school, and there I retired to sleep quite early the evening before the class.

From the bed I could see the classroom walls filled with posters with English words about animals, numbers, body parts, day of the week… and I felt thrilled for the upcoming experience.
Really, I never had chance to deal with kids before in my life! I had no idea how that could go.

Soon after I woke up, my bed disappeared and kids arrived for the Friday lesson.
Friday it’s a special day called “dia ludico” (game day) and normal classes are replaced with a playful lesson with some game that involves the English words learned so far – cool because I could play too! 🙂

Classes had 7 kids in it, with mixed ages ranging from 8 to 14 years. 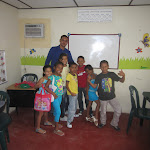 The teachers introduced me like “a visitor from the organization in Holland visiting the project” and kids were looking at me with curiosity.

It took some time for them to put the shyness aside and start talking to me.

In the morning the teacher prepared a kind of “bingo” game with English words instead of numbers: animals, colors, jobs, countries, clothes.

Afternoon class instead had a game where the kids were randomly selected to answer a question in English (e g. “what´s your favorite color?”, “what day is it today?”, “how do you feel?”…) 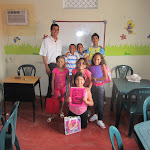 But when the kids saw my playing cards we played together the only game I could think of: memory 🙂

Kids are learning fast and, maybe more important, have something more to do beside their college standard education.

All the children I spoke with are happy with the classes and they love the Friday playful lessons.
I asked few of them what they wanted to become: pediatric doctor, policeman in the National Army, plane pilot…

Of course I told them English is very important to become what they want to be! 🙂 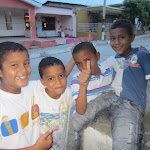 These kids are smart… are aware of how dangerous (caliente) the area is. They are aware of drugs, violence and crimes all around. But they are living their childhood with hopes and dreams and they are sweet… I spent some hours with them and it was funny to listen what kind of questions they had, including “how they have the hair in Holland?” or “do kids have Play Stations there?”.
They also wanted to tell jokes but I could not understand their “costeno” Spanish, I assumed they were funny doh 🙂

I give them as a gift some little Dutch clogs and some lollipops. And some coins from Europe, US and Panama’ so they could remember me…. but they immediately went to the shop trying to buy candies with a 10 cent $ coin!
I thought so much about what to bring them, trying to find something they need, but what these kids really wanted was just to talk to me, to have someone listen to them and someone that tells them how the world is outside the Revolo.

Well, after 3 days here I felt trapped and moved to the northern area of Barranquilla to discover the “other side” of this underestimated city.

The center area is going under a massive renovation and it´s not as dangerous as it is used to be, so I think (and hope) that soon more tourists will arrive here, boasting the economy and giving these kids an opportunity to enter the workforce using English that they’re learning now, thanks to Ninos en Contacto!

People in Barranquilla like to party till late and are very proud of their city.
And when I was in the north of Barranquilla having fun dancing Salsa something shocking happened: suddenly a group of 20 policemen arrived, the music stopped and they started searching people.

A (drunk) man in front of me got really angry and shouted “what are you doing here! go south! go to Revolo!”…

Where to dance Salsa in Barranquilla, Colombia

Where to dance Salsa in Cartagena, Colombia

1 month on the road: Panama and Colombia