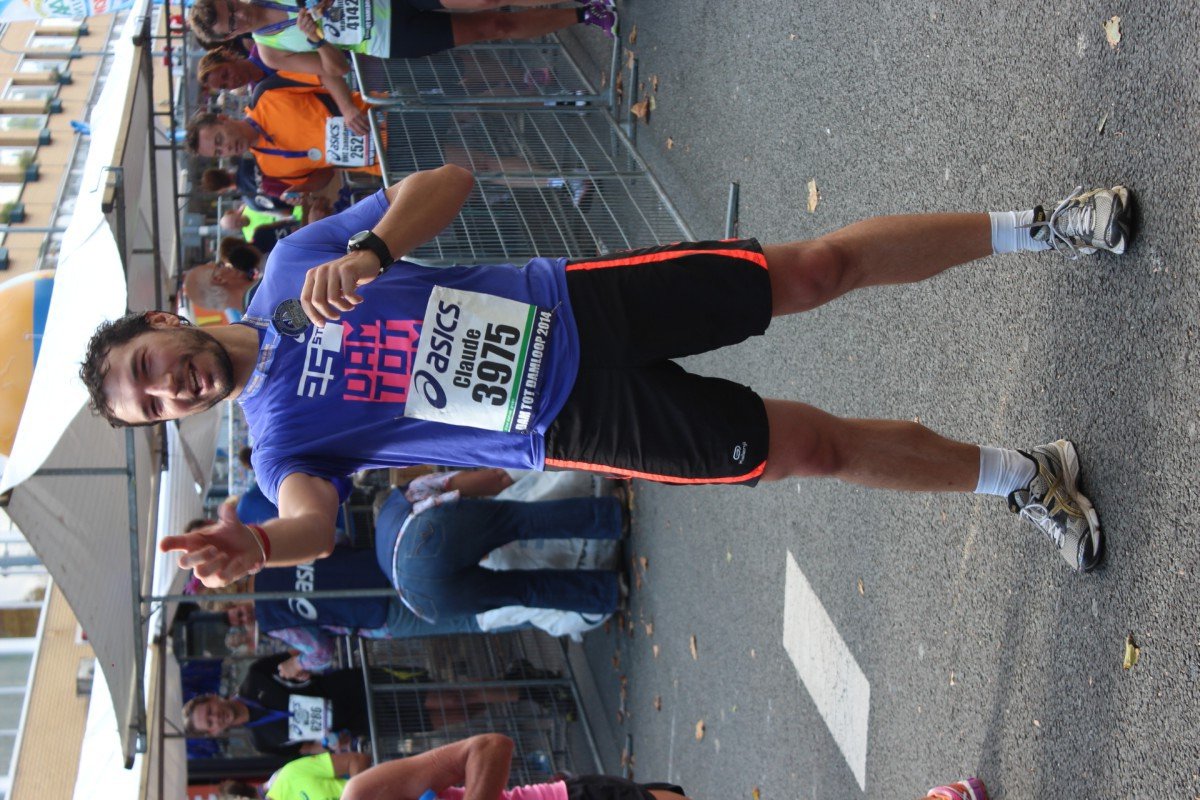 Dam tot Damloop is a running event starting from AmsterDAM and ending in ZaanDAM (now you see where the name comes from, right?).
Sunday 21st September I run for the second time this 16.1km popular course. 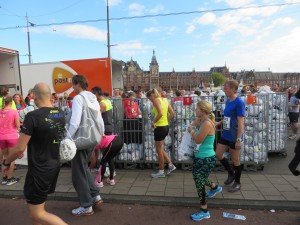 Popular is probably an understatement: 45.000 people took part to this edition, and I bet the organizers had lot of fun to make things work like a clock!
The starting point was next to Amsterdam Central Station, with lots of PostNL (the national post service company) trucks loaded with the bags of the participant, labeled and grouped by starting number.
While we were running, the trucks diligently delivered our bags like they do everyday with the mail, that here in Netherlands reach destination within 48 hours.

Also the participants were accurately grouped by starting number in a different starting areas.
I was in vakstart 3, scheduled to depart at 10:38am (10:38! so precise!) with my number 3975.

Well, I need to do one step back because that wasn’t originally my number. I run undercover, with the pseudonym of Claude.

One of the most characteristics things of the Dam tot Damloop is that, no matter how many thousands of people will join, every year the entrance tickets are sold out in a couple of hours.

Last week I searched around for someone that could sell his entry bid, and unfortunately for him, Claude was.

10:38am, BANG! The gun shoot in the air and an army of 1.700 soldiers slowly started moving east leaving vakstart 3.
The people cheering up their friends and relatives, and the bands playing on the side of the road awaken in me memories of the magic atmosphere of those running events.

You’re not an individual. You’re part of something greater and beautiful for 16.1km. Everyone share the same passion and has his own goal. All different but all the same, like in life 😉

At the entrance of the Ijtunnel, the almost 1km long tunnel under the water connecting Amsterdam to Amsterdam-Noord. a band of Brazilian percussion is playing full on, making their powerful rhythm echoing for hundreds of meters.

I wondered if the engineers, architects and builders that realized this tunnel with an highway inside ever thought that one day an horde of 45.000 people would have run in it. And I can now notice every single meter of this tunnel that I drove dozens of times in the last years by motorbike, van or cars without paying much attention.
And my mind drift thinking that the human race, capable of wars, violence and other terrible things is also capable of beautiful things that are enjoyable but not necessary logic.

The part of the run after the tunnel is not that interesting but necessarily on wide roads to keep the stream of people going. In few kilometers the mass of runners will stretch more and more.

That’s where we enter Amsterdam Noord, with the little streets with cobblestone and the locals partying in the streets and cheering us up. The kids stretching their arms looking for an high-five from a runner. The bands and DJs playing on and on.

It’s so entertaining! Much more entertaining than my GPS watch, that I keep looking to see how I’m doing.
I wanted to start slow so at first I keep a comfortable pace (or at least I tried).

The run is a succession of entertaining happenings outside and curious thoughts inside. The weather is great with almost 20C and some wind. 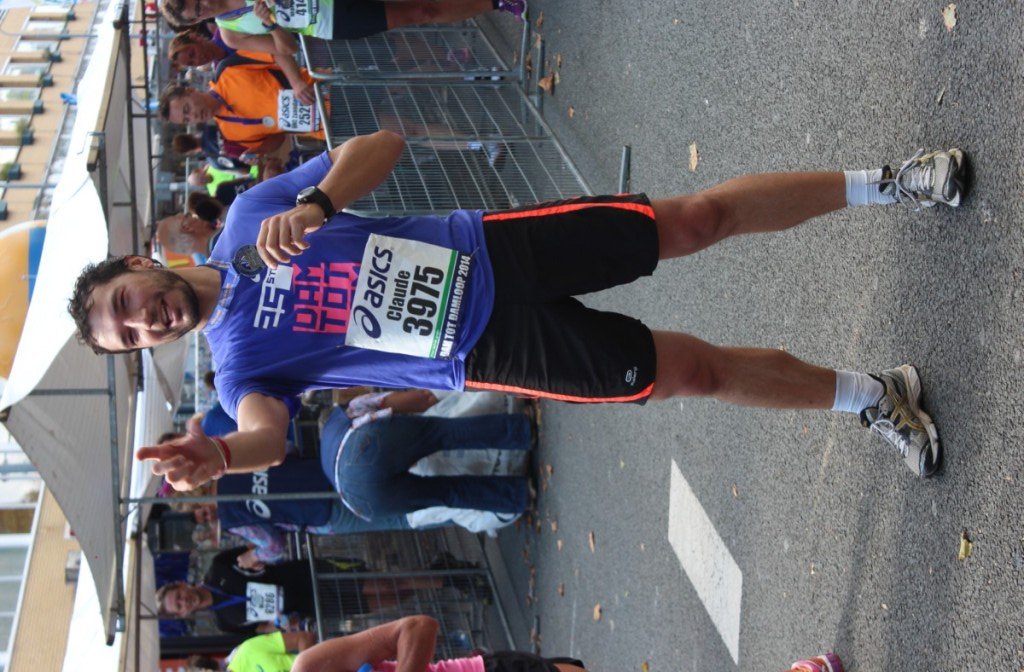 Singing a song after finish line

At KM 8 I feel a bit of pain in my operated knee and I feel bad because I still have to run half the distance! I didn’t had that in my training sessions, and I suspect it’s caused by few sharp corners along the way. Anyway, by KM 9 the pain disappear and I’m positive again.

I want to lower the pace after the 10K mark but I postpone for after 12K, that’s my ‘unknown territory’ as I haven’t run more than 12K in a long while.
I felt pretty good and excited to enter the Zaandam area, KM13, 14, now is time to push!

I checked the map yesterday and I’m expecting a 180 degree turn before the finish line, but I didn’t realize that that corner was much earlier than I expected. I look up and I can see the FINISH sign just few hundred meters away… then I go for a massive sprint with people shouting and applauding me all the way till the end of the run!
Or at least, this was my perception indeed 🙂

I won this race!
I won the race together with everyone else that had fun and enjoyed the run.

And I’m very happy for my run.

Enough bragging, here some graphs, bars and numbers for who may care.

Here the stats from my GPS watch: