Where to dance Salsa in Ubud, Bali

Ubud is a fantastic place: the rich Balinese culture, the ever-alive traditions, and an amazing variety of food contribute to the ultimate spiritual experience that so many visitors (most of them, women) are after.

It goes alone that in such environment, Salsa found its natural place.

If you arrived on this page, I probably don’t need to make a big effort to convince you that Salsa, when danced right, is a genuine connection with our true self.

Did I fail? Alright, it’s still a lot of fun and a great way to socialize 🙂

The Salsa scene in Ubud

I’ve been to Bali few times in the past two years, with a couple of one-month stays (check my mini-guide One month in Ubud).

That’s enough time to explore different aspects and, being a Salsa addict in rehab, the dancing scene was part of it.

Let’s go straight to the point: the Salsa scene in Ubud is rather small but pretty active.

You can dance almost every day of the week, in small parties that see the usual hardcore dancers, next to the occasional tourist passing by.

And it’s exactly for the tourist that, like me, feels like wondering the World on the clave rhythm that I wrote this article.

One thing that surprised me is that Indonesian men do dance. It may sound weird for me to say that, but after visiting places like Thailand, where 100% of girls were locals and 100% of guys were foreigners, I was under the wrong assumption that South East Asian men were not into latin music.

That’s certainly true for Thais, but not for Indonesians (and Vietnamese, I realized during a trip as I wrote on dancing Salsa in Ho Chi Minh City).

Next to the locals, you’ll find a group of hardcore semi-residents foreigners that are living – on & off – in this beautiful place.

That would be already a nice mix, but the ‘cherry on the cake’ are the already mentioned tourists.

Ubud is very touristy. Women in their thirties are flocking in after reading ‘eat pray love’ from all over the world.

This makes the scene an ever-changing melting pot of backgrounds, cultures, and dancing styles. Salsa is danced in many variations, with LA on1 being the most popular, but bachata is played too, with some occasional cha-cha and an increasing number of kizomba (grrr).

She (the Japanese singer) even got the chance to sing a couple of songs wth the band.

Yes, the bands! I almost forgot to say that in most of the parties there’s live music. You get actually spoiled by it, and you’ll miss it when the music is played by a DJ.

I saw three different bands playing and they were pretty good. I have a weak spot for percussions and the conga players were my favorites.

A bit funny to hear Indonesians singing in Spanish, with their accents and occasionally shouting ‘a bailar!’, ‘a gozár!’, or ‘que rrrrrico!’.

As Ubud attracts so many women, there’s a chronic shortage of male dancers.
That’s sad, and created a market for local dancers ‘rented’ by women for the whole evening… I was shocked to hear this at first, but it seems a practical solution and not far from paying an instructor for a private lesson. I hope this article will get more men on the Salsa scene over there!

So, let’s check where to dance Salsa in Ubud.

Where to dance Salsa in Ubud 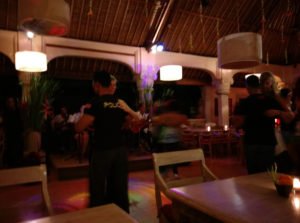 Indus is an upscale restaurant were Indian specialties are mixed with Indonesian traditional food and pizzas.

Prices aren’t popular, but if you go there on a Monday or on a Friday evening you’ll get live music and some dances.

The atmosphere is nice and the dance floor, after moving some tables and chairs out of the way, is just enough for the crowd.

It gets quite busy here, especially on Mondays.

Indus is located a bit outside of town, after the Bintang Supermarket in Jalan Raya Sanggingan on the right.
Anyway, it’s a short ride from Ubud center, and I hope you already rented a scooter as it’s the best way to move around. 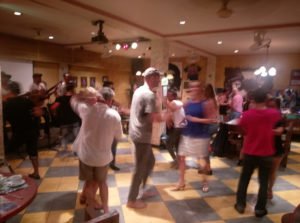 This Cuban place has a lot of character and is the latinos headquarter in Ubud.

Just look around to see lots of Cuban signs, and happy messages written on the walls by visitors from all over the globe.

When I was in Ubud the first time, there was live music here every night from 7pm to 10pm.

Nowadays the situation changed a little, and the Salsa nights are Wednesdays, Thursdays and Sundays.

On Wednesday there’s DJ music, while the other nights a live band makes it a popular Salsa party.

It’s located in the heart of Ubud, in Jalan Dewisita.

This place, in the touristy Monkey Road, is a versatile spot that hosts different nights with music ranging from pop to latin.

Thursday it’s Salsa time. Yep, the same nghts as in Havana Café… but there’s quite of a difference. Due to its location, Laughing Buddha attracts also non-dancing tourists and to keep everyone happy a lot of merengue and even some dance music is played. So I think is the best option for the casual dancer or if you are with non-Salsa friends.

Of the places I mentioned in this post, this is the one I visited less and I can’t say much more about it.

If you’ve been there, please do leave a comment and let me know.

A special mention goes to Agung and the other folks at the Ubud Studio. This is the only Salsa school in Ubud and it contributes greatly to the Salsa scene.

You’ll often see dancers from the school on the dance floor wearing the funny ‘Eat Pray Salsa’ t-shirt (that I bought, of course).

Do get in touch with them at the Facebook page, and check their classes and workshops as they often have something interesting (in my case, was my first belly dance class, ouch!!!).

This completes the overview of the Salsa scene and parties around the mighty Ubud. As things often change, please leave a comment if you notice something is different than reported and I’ll be happy to amend the article.

Also, before visiting do get in touch with the guys at Ubud Studio Facebook page!
They are a happy group of very helpful people.

Where to dance Salsa in Amsterdam