This report is part of the Baltic Cycling Tour I did in July 2013 across Lithuania, Latvia and Estonia.
After a difficult second day of our tour, the third stage was for me the hardest.

We started cycling a bit after 8am, following the A11 road.

It was a boring main road but at least there were almost no cars till the border with Latvia, that we crossed after taking the ritual pictures 🙂 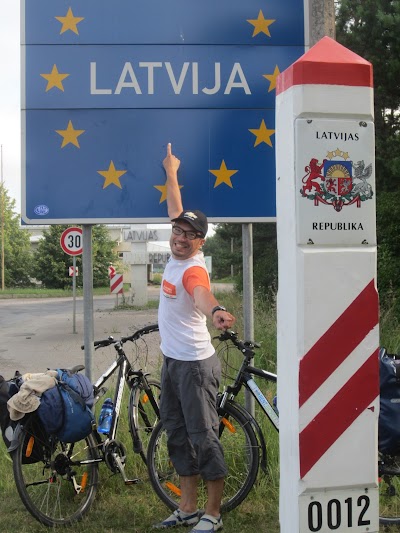 We stopped in Rucava, a little village, in order to get some breakfast and cash in the local currency (LATS).

A car pass by. Then comes back. It has an Italian license plate.

That’s how we met Stefano, a man from Pesaro that with his Latvian wife just bought an holiday home of 150 m2 with a garden for the equivalent of………. 17.500 EUR!
He invited us for a coffee and to meet his family.
Thanks Stefano and good luck with the renovation works! You could have bought a new Fiat 500 but you got yourself a castle instead. 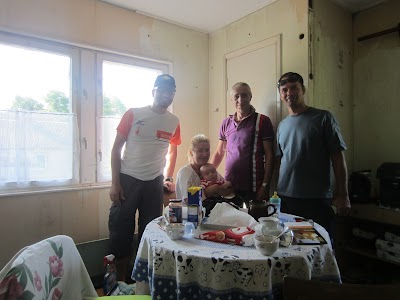 Stefano’s family in their new house

We continued cycling with a good pace and enjoying the sunny day till we were about 30km away from Liepaja, our almost-destination because Karosta is just after Liepaja.

I insisted to abandon this boring A11 and venture in the bike path…. What a genius idea!

Also there, like the day before, an unpaved road was waiting us and we had gravel-fun for 15km.

Our legs, speed and moral got hit pretty hard and once back on the A11 we were both pretty tired.
Add a noticeable wind against us and a grumpy person in our group (I won’t disclose the name for respect of him) to complete the picture.

Luckily we found a great camping where we had a fantastic time: a delicious cheese salad,  meat on a skew, and fast Internet!

One thing that impressed us, and that we noticed all around Latvia, is that food is presented extremely well.

I mean, we were in a camping in the middle of nothing and check how carefully presented are those dishes: 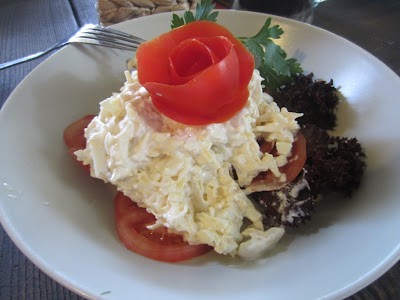 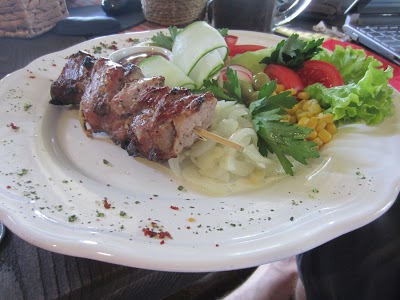 Super bbq meat on a skew

After some rest we continued fighting the wind until we reached Liepaja, where my GPS watch went out of battery (the data above is in fact incomplete).

But OK, we were almost there. We just had to cross the town in order to reach the mighty ghost town of Karosta.

Karosta is really one of the most surreal places I’ve been.

It’s a port area, used as military area by the Soviets. It used to have 20.000 inhabitants but after the USSR collapsed… in no time everyone left and only few thousands people stayed!

Everywhere there are abandoned, empty buildings in Soviet style.

It was indeed the perfect place to spend a night in prison.

We reached the prison of Karosta just in time to check-in.
I was so tired that I was feeling exhausted, physically ill.
Well after 9pm we had the prison tour, and we got told that this was a military prison originally, used to ‘re-educate’ disobedient soldiers that were sent here for just few days. And there are stories of ghosts because later on it became the last place for many prisoners before execution…

So, to summarize we paid to sleep in ghosts-infested cells of an ex prison in a ghost town.

It was a sad place but I was so tired that I slept very well on the wooden plank only covered by a thin mattress. 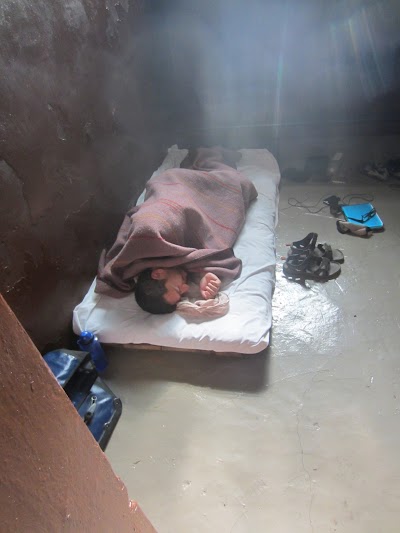 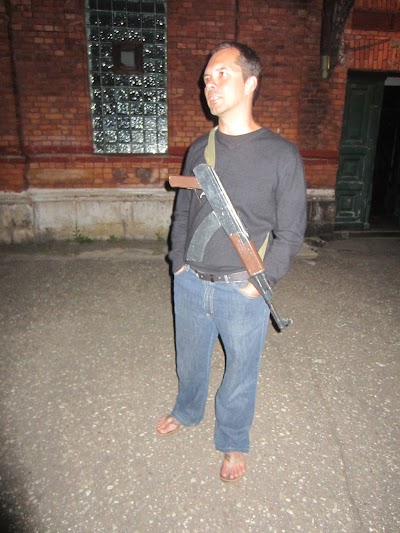 One of the prison guards, from Transnitria region

All the photos from stage #3 of the Cycling Baltic Tour and Karosta: